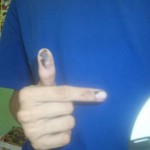 Lately I have been catching Ma’am Cecille in Y!M and of course I couldn’t help but ask why, considering that she’s supposed to be at school. She told me that she’s at Trento and that one of these days, she’ll give birth to a child!

Aloha! In no time the first semester for this academic year will be over. Semestral break’s here again. Hopefully there’ll be time for us to see each other again. Drama. Anyway, last 11-15, I went to Manila for an IT Congress and, of course, had some time with our fellas there — Jesha, Joey, Kamille Angelie, and Mary Cherubin. I strutted in TriNoma and we went to Star City. The gallery’s now filled with new pictures.

On other news, I heard that Jollibee will finally open in San Francisco one of these days. I wonder how it would feel like now that the municipality is slowly leveling-up. Lol. Well, I just feel so sorry for those who reside in this place called Prosperidad. I guess its big land area did not attract the fast-food restaurant at all. 😛 (random) John Paul and Dovie lost their cellphone units.

Death of a Friend’s Father

Last Tuesday I received a text message from Ate Aimee. It read, “Si Jun Dalen dead on arrival sa hospital gabii. High blood…” Of course I instantly believed it because my sister works at the D.O. Plaza Memorial Hospital. The reason was heart attack. I met Naiza here in our campus and she also heard the same reason. Also, according to her, it was the first attack, which unfortunately lead to death…

Let us all pray for the serenity of his soul and for his family. He was a father, a loving husband, and a good friend. His burial will be tomorrow.